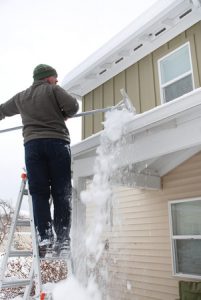 It’s that time of year again when snow and ice wreak havoc with Pennsylvania homes, including those in the Poconos. What do snow and ice do to your roof?

Perhaps the worst thing to happen to PA roofs in the winter are ice dams. When ice builds up on the eaves of sloped roofs of heated buildings, melted snow under a snow pack reaches the eaves and freezes there. The ice dam is a ridge of ice forming at the edge of the roof. It prevents melting snow (water) from draining off the roof like it should… water backs up behind the dam. It’s going to look for somewhere to go, and it could end up leaking into your home causing damage to ceilings, walls and insulation.

If and when snow/ice/water makes its way into your home during the winter, it could lead to the formation of mold and mildew which cause respiratory problems. Also, these sort of leaks generally make a mess– one that needs to be cleaned up/attended to by a professional. If and when you can avoid ice dams, make that a priority each winter season!

Typically, snow/ice melts and should flow down your roof and directly into your gutters– and away from your home. However, what if your gutters are clogged or broken? Where’s that water going to go? It might find its way into your house, and/or cause problems with your foundation if/when it pools at the base of the building all in one spot with nowhere to really go.

Too Heavy a Buildup

Sometimes snow and ice build-up gets to be out of control on the roof, to the point where the weight load is too heavy for the roof to bear. Some people attempt to use a snow rake to remove excess amounts from their roof. They try and pick at the ice to break it up and get rid of it. There’s a risk they’ll injure themselves or their roof/gutters/windows doing this on their own. If you’re thinking of using a snow rake and/or going up on the roof to use one, it’s best to call a professional who knows what they’re doing– and this way you’ll avoid injuring yourself!

Weight is truly an issue in the winter– if snow is more than 8 inches high on the roof, you should consider doing something about it.

If you need any roofing work done, call Roofing By Bruce at 570-424-8891 to come remove it so your roof doesn’t accidentally leak or collapse.