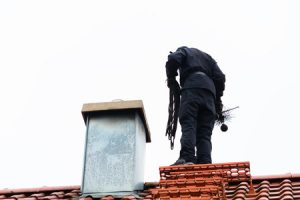 What are some reasons to schedule a chimney sweep?

If It’s Been Too Long

If you don’t know the last time the chimney was cleaned or inspected, then it’s time! Oftentimes, people will schedule a chimney sweep before they decide to put their house on the market and sell it. Or, once a new owner moves in, he or she will want the chimney checked, especially if a fire in the fireplace is of utmost importance.

Knowledge of the Inside

Sometimes people will take a quick look at the outside of their house and notice the chimney. If everything looks “good” to them, they won’t think twice about hiring a chimney sweep to come take a closer look. However, how does anyone really know what’s going on inside a chimney? The average person can’t easily look up/down there and see what’s really going on. Professional chimney sweeps can– they have the tools and know-how to see (and interpret) things the average person cannot.

Does the flue have cracks? If so, you could have a house fire and that’s not good. The flue carries heat, toxic fumes and smoke out of your house. If the flue cap atop the chimney’s damaged, water could be leaking into the flue and causing it to deteriorate. Both heat and water can cause trouble with your flue to the point where it cracks. If/when cracks occur, you could end up with toxic fumes entering your home. Meanwhile, masonry cracks can happen, too. Experts know what to look for– it’s a good idea to have a chimney sweep inspect your whole set-up on an annual or semi-annual basis, for safety’s sake.

Finally, there’s something called “creosote.” It can build up inside a chimney and then ignite. Do you have any inside your chimney right now? Is there too much in there? Should it be removed? A chimney sweep will be able to find out! Also, chimney sweeps can look for animal nests, too. You don’t want to be roasting racoons the next time you light a fire in the fireplace.